Free Plot Scheme Gujarat State, Government of Gujarat's Scheme to get free plots for residential purposes. beneficiaries will now be able to get free plots of land quickly due to the amendments made by removing the inconsistency of the scheme of giving free plots of up to 100 square feet to landless farm laborers and village artisans living in rural areas. 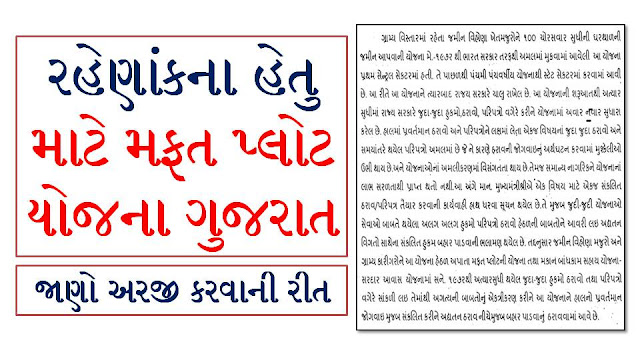 New instructions have been given by linking this scheme with the building construction assistance scheme. So now the poor who have BPL card or BPL ration card will get 50 to 100 Var the house plot for free. The applicant must have lived in the village for at least one year. For this, gram panchayats will be able to take government waste or government owned land to the village level. If such land is not available, private land can also be acquired within the limit of Rs. One lakh per gram panchayat.

The land acquisition for this will be decided by the committees of the office bearers including the President of the District Panchayat, the District Development Officer and the District Collector. There are repercussions that the state government has taken this step in view of the elections.

With the auspicious intention of implementing a public welfare scheme in the spirit of development for all in a dynamic Gujarat, a new policy has been implemented by the state government on the occasion of the founding day of Gujarat on May 1, 2018 by amending the existing policy of giving free plots. The name of the state government is to provide 100 sq. Ft. Housing plot free of cost to the homeless beneficiaries living in rural areas.

The scheme was implemented to provide 100 sq. Ft. Free of cost to farm laborers registered in rural areas or homeless BPL as well as rural artisans. Under this scheme, the state government has allotted free plots to all the eligible plotless beneficiaries with 0 to 12 and 15 to 20 multiples under the free plot scheme. It may be mentioned here that due to some vigilance under this scheme, the needy beneficiaries without plots or houses in rural areas could not get the benefit.

Such as being a beneficiary of Pradhan Mantri Awas Yojana but not owning a plot or not having a name in the list in BPL, the plot could not be allotted due to which the benefit of Pradhan Mantri Awas Yojana cannot be availed. As a result, as the plots in rural areas or the homeless needy beneficiaries are getting their representations in the government, the state government has made necessary amendments to the existing policy to make the plots easily available to the eligible people in rural areas.

The new policy has been implemented with the resolution of 01.09.2018. According to the new policy, in the definition of family, an adult, his spouse (if any) and his minor children can also benefit. Area Development Authority does not include the area of ​​Urban Development Authority which was done earlier. Awareness registered under BPL list has been canceled. Instead those who are eligible under CECC or eligible for housing assistance under a state or central housing scheme. Must have been living in the village for at least one year.
Share on Facebook
Share on Twitter
Share on Google+
Share on LinkedIn
Newer Post Older Post Home